Water power was the original life blood for industry in Massachusetts’ Connecticut river valley. Greenfield’s first industrial activity began with the construction of the Green river dam, at our present museum location. Historic records suggest mill operation may have started as early as the 1690s, but more specific activity with Greenfield village and the mill’s managers are mentioned in the 1902 “History of Greenfield”, by the year 1710.

Earliest Known Photograph of the Green River Mill site as it looked pre-1876. 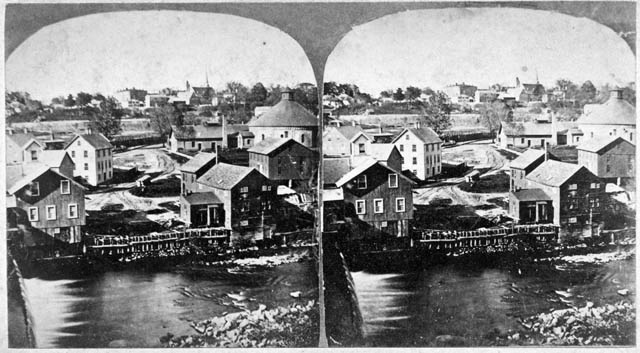 This stereo view is the earliest known photo we have of the mill site, and is also the present location of our museum. The photo was taken from the bluff where the Green River Cemetery is now looking north towards downtown. The left side of the scene shows the same mill that was eventually destroyed in a great fire on May 7, 1910.

Our wooden museum building is visible at a surprise location, in front of the round gas house building, at the upper right side of the picture. Fire destroyed the ‘foundry’ building (to the right of the mill and on the river bank) in the later 1870s. Our museum building was then moved to its present location when they rebuilt the site. 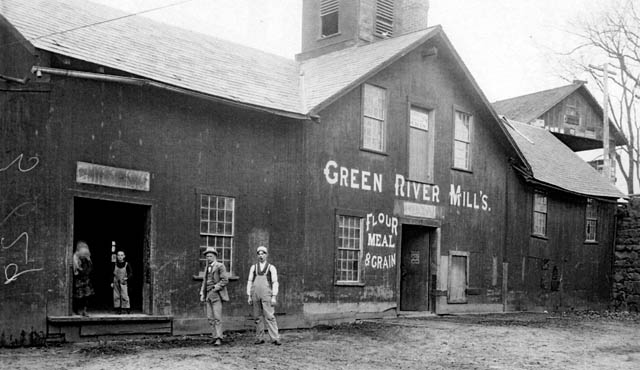 Entrance Side of the Green River Mills

It is not known how many water powered mills actually existed here, over the years. Our earliest photo (the stereograph) shows the same mill as we have in all the other photographs. Certainly there were earlier buildings and waterworks, but so far, no historic descriptions survive. These last two pictures show the mill with all its final construction.

On May 7, 1910, a very strong westerly wind was disturbing Greenfield’s enjoyment of Spring. During the mid-afternoon, someone apparently discarded some lit smoking materials, on the wooden bridge. This quickly fanned into flame, and a rain of fire began to fall into the south eastern part of town. Solon Stone, the mill operator for the W.N. Potter & Sons Company (owners at the time) smelled smoke, and directed one of the helpers to grab an extinguisher and find what was burning. It was already too late, for the mill. Within minutes the 40 mile an hour winds forced them to evacuate.

Burning shingles from the bridge carried fire across Mill, Deerfield, Hope and Washington streets. The train yard was evacuated. A large warehouse on Hope street was almost completely destroyed. A family was burned out of their home on Deerfield street and a barn with carriages, sleds, and equipment were also lost. Fires continued to start every where, and Greenfield’s citizens actively assisted their neighbors in preventing an even greater disaster.

The biggest blazes were battled by the Greenfield and Turners Falls fire companies. The Turners crew required over half an hour to drive the horses to the scene, nearly killing them from exhaustion. The combined effort of the fire fighters was then frustrated by the fact that their two towns had equipment which couldn’t interconnect with each other. This prevented them from combining different pumps and hoses from between their companies. This lack of standardization of fire hose equipment was starting to be a severe problem all over the country as large fires raged out of control in large and small cities. Ironically the solution to this problem was solved with the involvment of a Greenfield company that had it's roots in our museum mill building which survived the fire..

The Fire Scene on the Morning of May 8, 1910 (courtesy Peter Miller)

The Greenfield Recorder newspaper published the account of the fire in its following issue mid-week. The Greenfield Courier was out the same day as the fire, so by the next week’s issue, it was discussing the aftermath and how to prevent the same thing or worse from happening in the future.

Nobody really cried over the loss of the old covered bridge. Mill and River streets were unable to have street car service, because the bridge would never be able to handle the weight and size of the trolleys. Now they would have to build a modern concrete arch bridge, allowing this part of town to catch up with the times. One of the biggest problems in the immediate future would be how agricultural fair traffic could get to the important fairgrounds in September.

Amazingly, the wooden building, which houses our museum today, was saved. You can see it in the above picture, along with all the other brick structures which may be visited on our museum tours.

The power company bought the site, constructed a non-attended hydro power station, and then generated electricity into the 1950s. This would extend the life of the Green River dam for a total of more than 250 years, as a industrial workhorse.

Computer graphics technology is an excellent tool for re-creating scenes from the past. The surviving photographs are studied and used as a guide to make historically accurate models of what these lost landmarks might have been. The resulting model is then tested by being turned into each of the photo views that survive. Once a single computer model can be matched in any of the surviving pictures, without needing more editing, we can assume the model is accurate and represents what actually existed. New views and scenes can then be produced in the same way television commercials and movies are made. A lost past can yet again be seen, from a time beyond living memory.

We are using a free and open source computer modeling and animation program, called Blender , to bring the Green River Mills back after 100 years. These images are from that effort.

The museum’s computer recreation of the Green River Mills 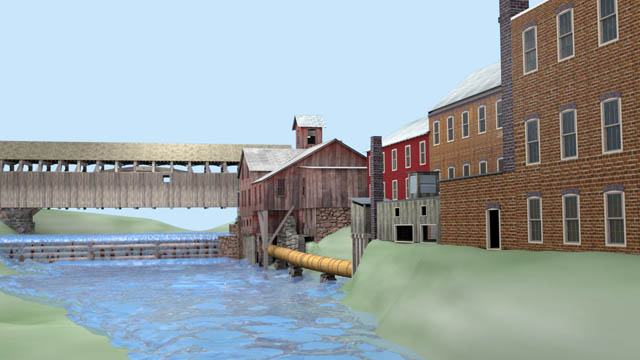 These views are part of a video presentation which can be seen when visiting the museum. We are hoping to expand and improve the quality of this model, and more could be available soon.

The museum is grateful to Peter Miller and the Ashfield Historical Society for the contribution of historic mill photos.