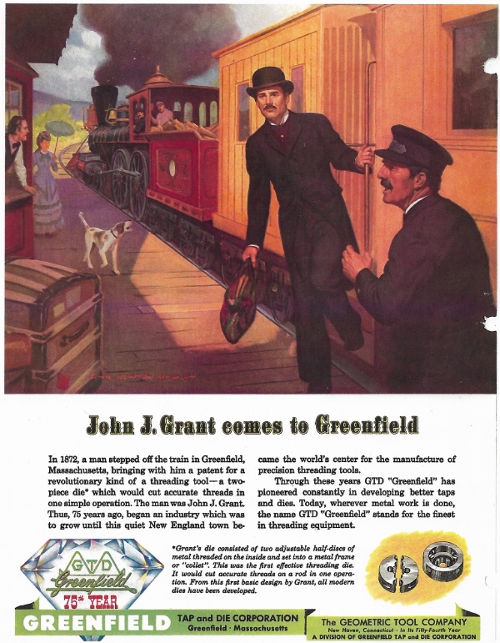 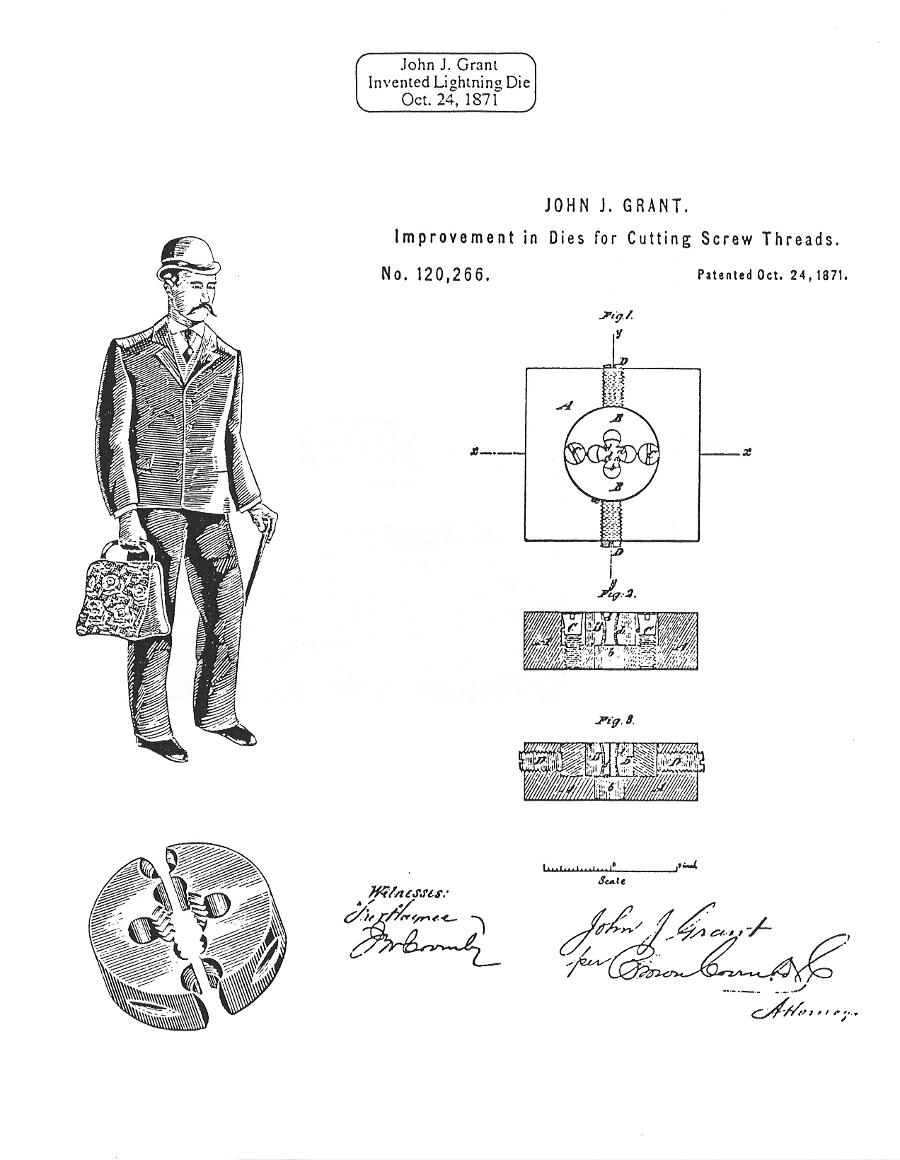 In 1871 John J. Grant Received patent number 120266 for Improvement in dies for cutting screw-threads forever changing the machine tool industries in Greenfield.
150 years later, this invention is still in use by many shops but has been replaced in some cases by more modern methods in manufacturing.

John J. Grant was a Northampton machinist originally from Liester England with an invention for a better tool for making threads on metal products. His invention was an improvement over the "jamb plate" which was often a shop-built tool used by blacksmiths to cut threads by "jamming" them on a round rod to form threads. He arrived in Greenfield in 1870 and set up shop in the Luther Pratt's machine shop in the Hope Street "Steam Mill" now occupied by the Wells Tool Company. They formed a short lived company Pratt & Grant but in 1871 they split up and Grant reorganized the company with a dozen partners as The Cooperative Machine Co. He had to sell his patent for a Bolt Cutter to finance the deal and in 1872 it landed in the hands of Wiley & Russell.

Not long after establishing himself in his Hope Street shop, in 1872 Solon L. Wiley and Charles P. Russell established the firm of Wiley and Russell to develop the ideas of Grant. They began their operations in a building which stood near the site of the Greenfield Tap and Die Corporation Plant 1 on the Green River. This building had previously been occupied by the John Russell Cutlery Company which had transferred to Turners Falls where greater water power was being harnessed to power new industrial buildings.

Wiley and Russells first products were taps and dies. Grant's die consisted of two adjustable half-discs of metal threaded on the inside and set into a metal frame or collet as an improvement to the work of the "jamb plate". From this first threading die sprang new designs and improvements, many from the men whose first connection with the tool industry were with Wiley and Russell. Many of these same men were later to establish their own rival concerns or work as responsible members of some of the succeeding tap and dies companies.

The Grant tool was more expensive costing 16 times more than the old "jamb plate" which it repaced but was more productive so it was necessary to market a screw plate assortment of taps and dies called "Lightning" to be used by hand with increased productivity and accuracy. Another early development was the "machine relieved" process by which the threaded portion of the tap was relieved back to the cutting edge" as a means of reducing friction and minimizing breakage. 1880 Lightning Screw Plate

Two years after starting their new plant, Wiley and Russell employed 40 men and soon afterward many skilled machinists left to form their own companies. Some of these independent firms were among those later merged to form the Greenfield Tap and Die Corporation of 1912 or absorbed by the GTD during its period of expansion.

These ideas like many new inventions were being experimented with in other industrial centers at this time but Grant's ideas seemed to have sparked a rapid phase of innovation of processes, special machinery and marketing in Franklin county. One reason for sure, like with other industrial enterprises here, was the willingness of local entrepreneurs to finance such ventures which may have been lacking in other cities. As the industry evolved, other thread cutting tool companies from outside the area were acquired and Greenfield was to become known as a worldwide center for this technology. This heritage survives today as the decendant companies Kennemetal / Widia and The Wells Tool Co. which still produce specialty Taps here in Greenfield. Wells Legacy by Cort Duda 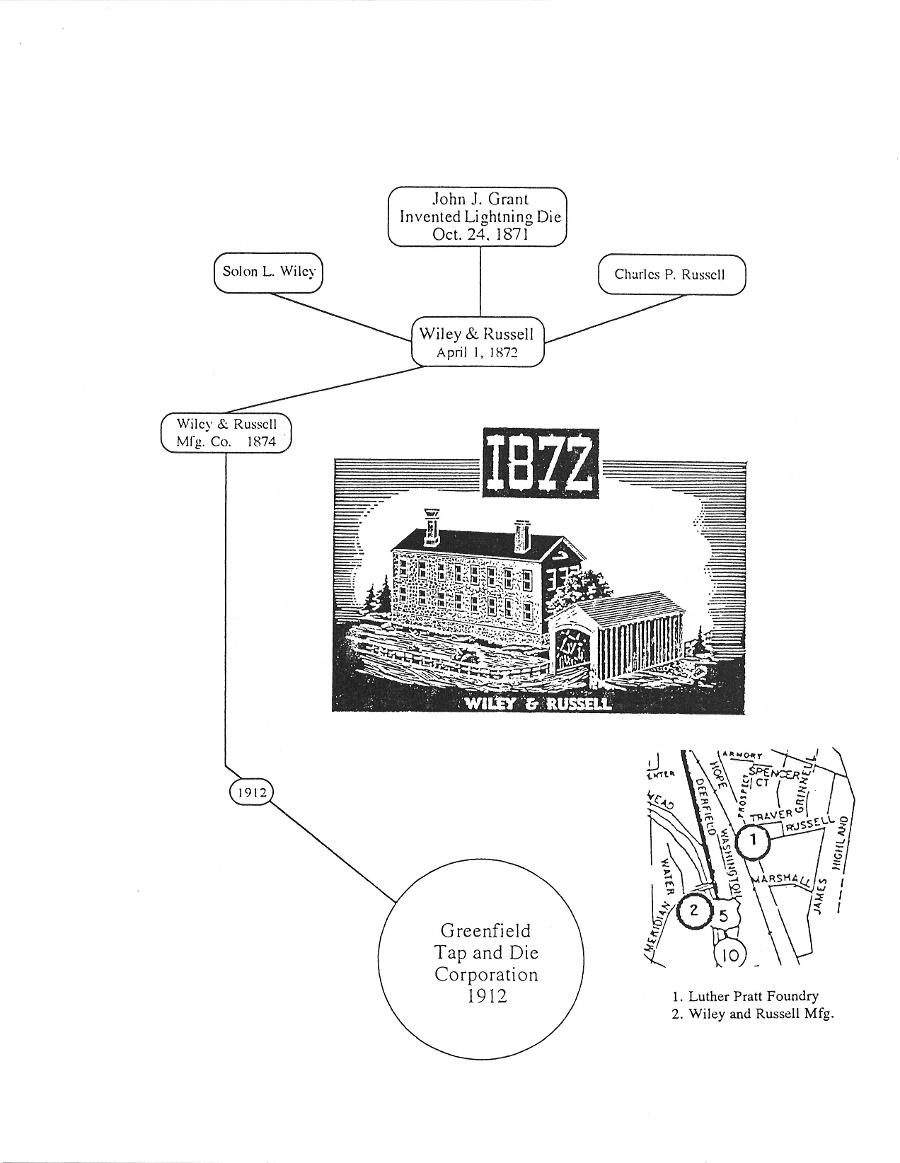 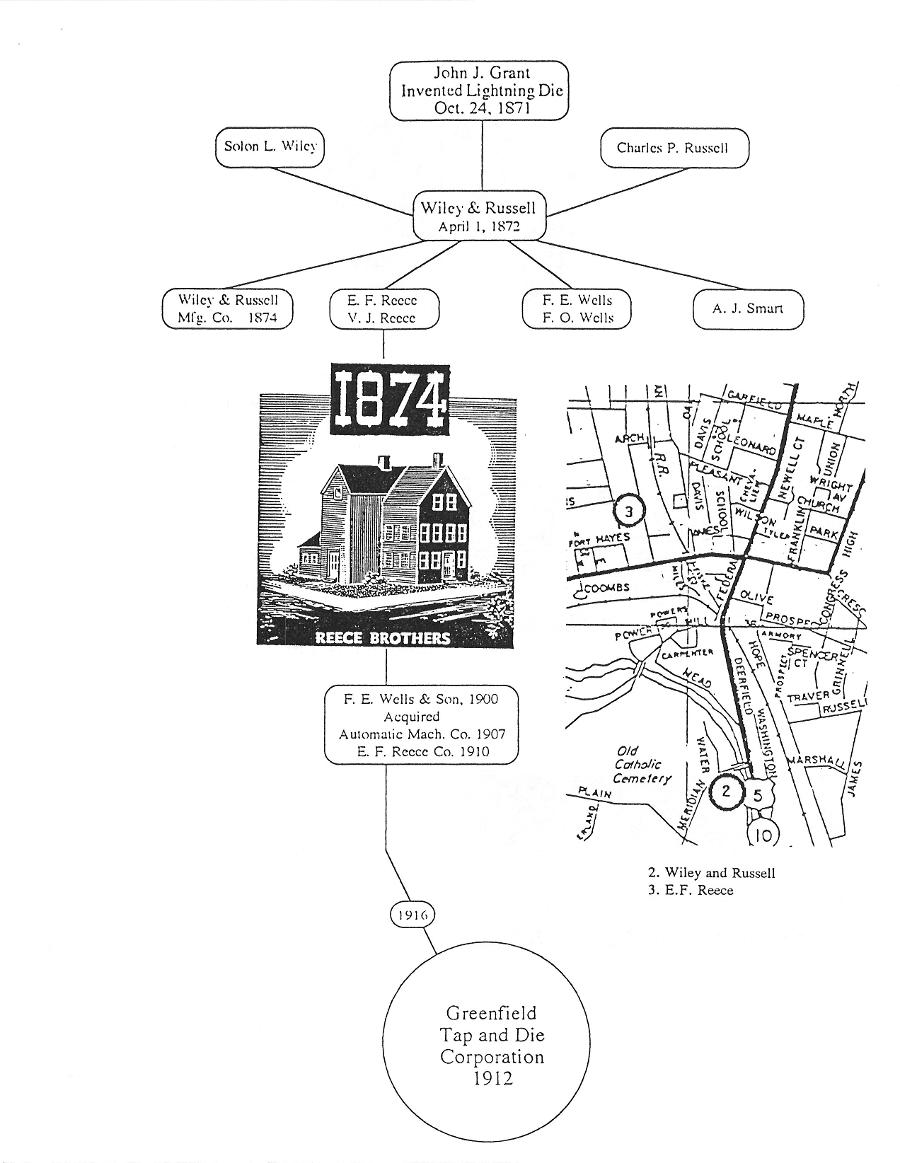