Next to the John Russell (cutlery) Mfg Co. the Arms Mfg Company in South Deerfield (for the manufacture of pocket-books) is the oldest manufacturing concern in the county, having had its origin as far back as 1845, when Dennis Arms began making pocket-books in a small way in this village. At first only two or three hands were employed and the material used at that time was largely sheep-skin, which Mr. Arms either tanned himself or obtained from the country tanners.

The principal market at that time was New York city, where the goods were sold to wholesale houses.

When ready for market the goods were taken in ox-teams to Hartford and shipped by boat to New York. In 1851 the firm of Arms Brothers was formed, comprised of William S., James C. and Charles, sons of Dennis Arms. At this time the business was largely increased by the manufacture of portemonnaies and the frames for the same. In 1854 a contract was made with the city of Boston to employ two hundred convicts at the house of correction in South Boston for the manufacture of portemonnaie frames and leather goods.

From this time different styles and varieties were constantly added to the line and the business steadily increased until the death of Mr. Arms, April 15, 1888, when the present firm was organized under the name of the Arms-Manufacturing Company.

In the summer of 1889 the factory building was entirely destroyed by fire. A new building, showing in the accompanying engraving, was immediately erected on the old site, in which the present company continues the business, manufacturing all kinds of pocket-books, bill books, letter books, card cases, etc. The goods manufactured have a good reputation throughout the country.

We give herewith a portrait of the late Charles Arms, Esq., the most active member of the firm, and the one to whom the reputation of the company is so largely due. He was a most estimable citizen of the town of Deerfield and contributed much to its prosperity. 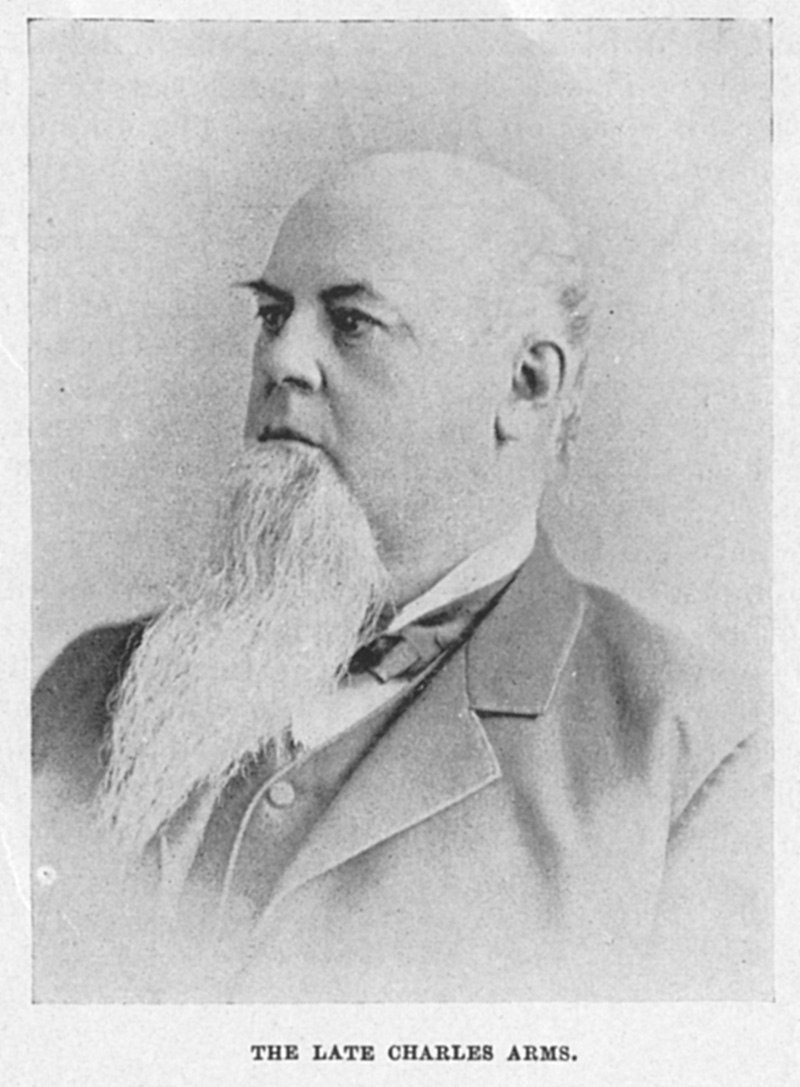 As an item of picturesque interest, in connection with the company it may be mentioned that the famous Bloody Brook and the monument erected in commemoration of the massacre, are but a few rods distant from the Arms factory.