This is one of the oldest cutlery manufacturing corporations in the country, and the fame of its products is world-wide. The engravings on the next page may be studied with interest, the antique picture especially, as it shows the works of the company, as they originally existed in 1846, on the other side of the stream. Probably the fishing in this vicinity was better in those days, as the picture shows at least two sportsmen with rods in active play.

The present company was organized in 1856, and have several times enlarged their facilities and capital stock, each time to meet actual demands, and at this time the works comprise some eight or nine commodious brick and frame buildings, of one to three-and-a-half stories, some roofed with sheet iron, and covering in all two and a half acres. The company own thirty acres of land and the dam on the premises—24 feet fall, affording 300 horse power — and have the option of another equal power just below, their own water privilege consisting of seven acres, and being one of the most desirable on the Deerfield river. Their machinery equipment is first-class, and embraces every device suitable to the work to be performed — forges, trip hammers, lathes, emery wheels, etc., in abundance and great variety. Two hundred and twenty-five skilled and unskilled operatives are employed, and the tenements in which they live form quite a village. The works contain over 30,000 square feet of flooring today, and the present business has developed from the simple manufacture of shoe and butcher knives in 1846. In 1849-50 the manufacture of table cutlery was first begun with the importation of a few workmen from Sheffield, England. The shops soon became too small and the company came over on the west side of the river, in 1850, buying two large farms, the Coleman and the Benton farms, for about $3000, and the old Benton farmhouse is still standing. Up to 1850 there was only a flash-board on a mud-sill to hold the source of power in the river, and in 1869 there was a great freshet and the first dam on the river was wiped out.

Messrs. Lamson & Goodnow came from Cummington, where they had been manufacturing scythe-snaths, and in 1847 formed the corporation by their name. 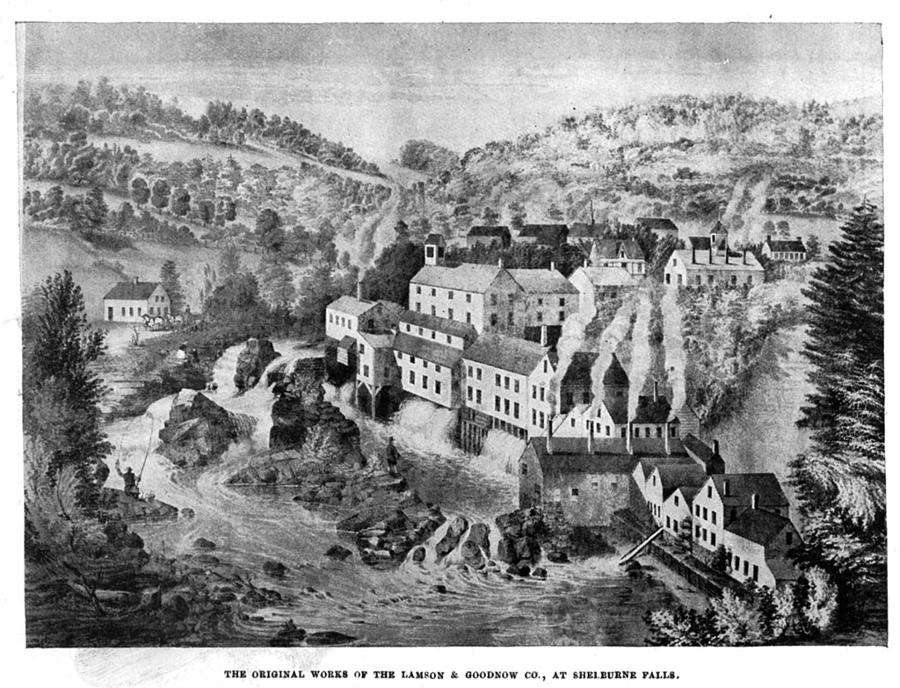 It would be impossible to describe either the processes or the goods of this company in the space to which we are confined. Suffice it to say that they manufacture every description of fine and medium table cutlery with solid steel, pearl, ivory, celluloid, bone, rubber, cocobolo and other handles, and with plain or silver-plated blades and tines, silver-plated forks, butchers’, bread, cheese, hunt­ing and other knives, etc. A specialty which they control, and which has proved a very popular convenience, is the Gardner patent carver fork-guard and rest, which commends itself at a glance.

One of the strong points with the Lamson & Goodnow company is the retention in its employ for so many years, of trained, experienced workmen. In the forging-room are two men who have been with the company over 40 years and three over .30; in the fork finishing-room three over 30 and three over 20; in the grinding room one over 42 years and five over 20; in the steel knife finishing department one 38 years and two over 20; in the saw room, one 37 years, one 29 and one 27, and the carpenter 29. In the tempering department men have been there 40, 29 and 26 years; in the buffing department, 33, 26 and 24 years; in the east wheel room, 38, 27 and 28 years. The watchman has made his nightly rounds for 28 years, the machinist has worked here for 23 years, and the die-maker 15. Rufus Smith has been here 44 years and James Gilligan 39, while F. A. Ball, the veteran secretary and once treasurer, has been here 43 years. The present officers of the Lamson & Goodnow company are: Pres., R. N. Oakman, Jr.; Sec, F. A. Ball; Treas., H. H. Mayhew, and these with F. H. Oakman and F. R. Pratt constitute the board of directors.