Other Websites and Information:

An excellent source of information about Millers Falls tools is available on this site: Old Tool Heaven - Millers Falls

The present site of the village of Millers Falls was a wilderness, there being but three or four houses, among which was the old hotel, which served as a hostelry in the old staging days, between Albany and Boston. The place was then known as Grout’s Corner.

The Millers Falls company is the outcome of a corporation formed by incorporating in 1869 the business of Messrs. Gunn & Amidon, which had been located in Greenfield. They bought the privilege on Millers river at this point, together with considerable land on both sides of the stream, and commenced the construction of their works, which, when completed, consisted of a one-story brick shop 250 feet in length and some small out-buildings. Today Millers Falls is a flourishing village of some 700 or 800 inhabitants, and the Millers Falls Co. works have been so enlarged from year to year as to cover a number of acres and a floor space of over 75,000 square feet. The company originally was called “Millers Falls Manfg. Co.,” but in 1874 it was merged into the “Millers Falls Co.” by absorbing the Backus Vise Co.

The company has established a considerable reputation for nice tools, and has built its business up on that basis L. J. Gunn, who, together with Charles Amidon, originated the business in Greenfield, is its present treasurer. H. L. Pratt is the president of the company and has general charge of the New York office. George E. Rogers is secretary at Millers Falls and Edward P. Stoughton acts in the same capacity in New York.

A large store is maintained in New York at No. 93 Reade Street. From a small beginning, this company has become one of the leading industries of Franklin county. It has a capital stock of $200,000 and employs two hundred hands.

In connection with the engraving which pictures the works we give a second picture showing the village and surrounding country, quite a picturesque view, which it was impossible to find room for in the main part of this work. 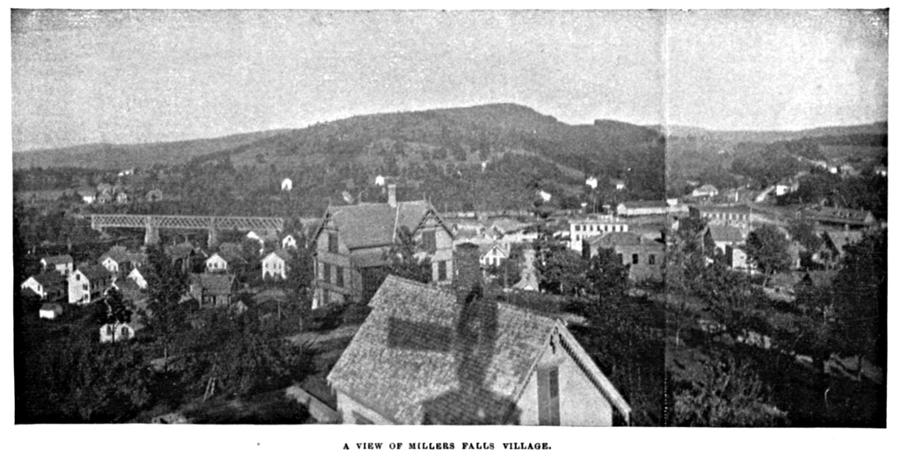 Millers Falls village, it should be remembered, is one of the manufacturing villages in the town of Montague. With Turners Falls it holds three-fourths of the population of the town, which is mostly a farming community, excepting the brisk-yards and fishing-rod factory at Montague City, which latter place was by the way, originally settled by Germans and intended by them for a manufacturing place.