The Wells Brothers - Frank O. & Frederic E. first set up business at our site on the Green River in 1878 after an unceremonious departure from the Wiley & Russell Co. In the picture below, notice the building to the right of the grist mill. We call this the “old foundry” and this is probably the only surviving photograph of the first Wells Bros. building. We have since learned that the “Old Foundry” was actually a nail factory before the Wells brothers moved in. Please also notice the wooden building in the foreground of the round shaped gas house.

Fire destroyed the “old foundry” only a few months after the Wells Brothers set up business. Their losses exceeded $3000, yet they were still able to relocate to Hope Street "Steam Mill" and operate for a time there. 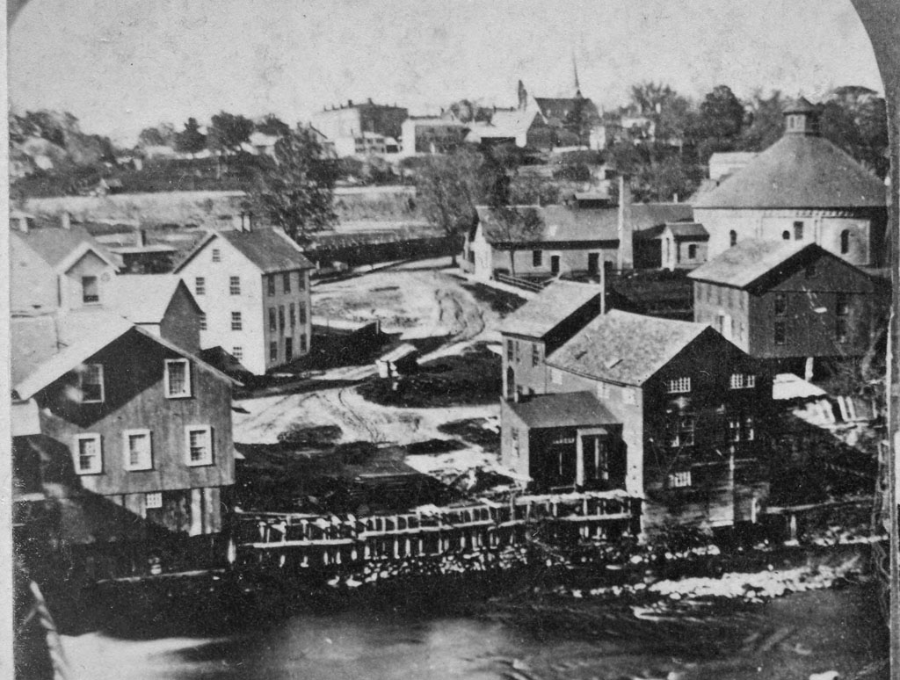 The owners of our Green River site were faced with the task of rebuilding from the aftermath of the fire. A new, single story brick factory was first built over the “old foundry” site. Then it was decided to also move the old Felt & Company office alongside this new brick building, and next to the grist mill. The old Felt & Company office was in front of the gas house and is now our present day museum building. It is the oldest industrial building on our site and is a classic example of commercial "Post & Beam" building construction from the 1840s.

The Wells Brothers returned to the Green River site in 1878. It is generally believed that the products labeled “Wells Bro’s & Co.” were made in our buildings during these next years. Newell Snow a local investor financed the construction of additions to mill and his son Franklin joined the Wells' as treasurer, hence Wells Bros. & Co. They became pioneers of the modern thread cutting tap and die industry. The core product at this time was the "Little Giant" Screw Plates (Taps & Dies). The die was constructed of 3 pieces - a collet which fit into the die stock (handle), a Guide, and the actual die that was adjustable. Their father Elisha, who was a blacksmith and had worked in the Russell Cutlery was their salesman and peddled the products by Horse and Cart as far as the mid-west. By 1889 the company had out grown the mill on the Green River and the company moved to Sanderson St. and became Wells Brothers Company. In 1900 F.E. retired from the business and ventured in to the Pipe Threading and Pipe Tool field and machine tools.

F.E. Wells Autobiography This unpublished biography came to us from the living decendants of F.E. Wells and describes the family's early 19th century life in the Shelburne Falls / Buckland region in western Franklin County. 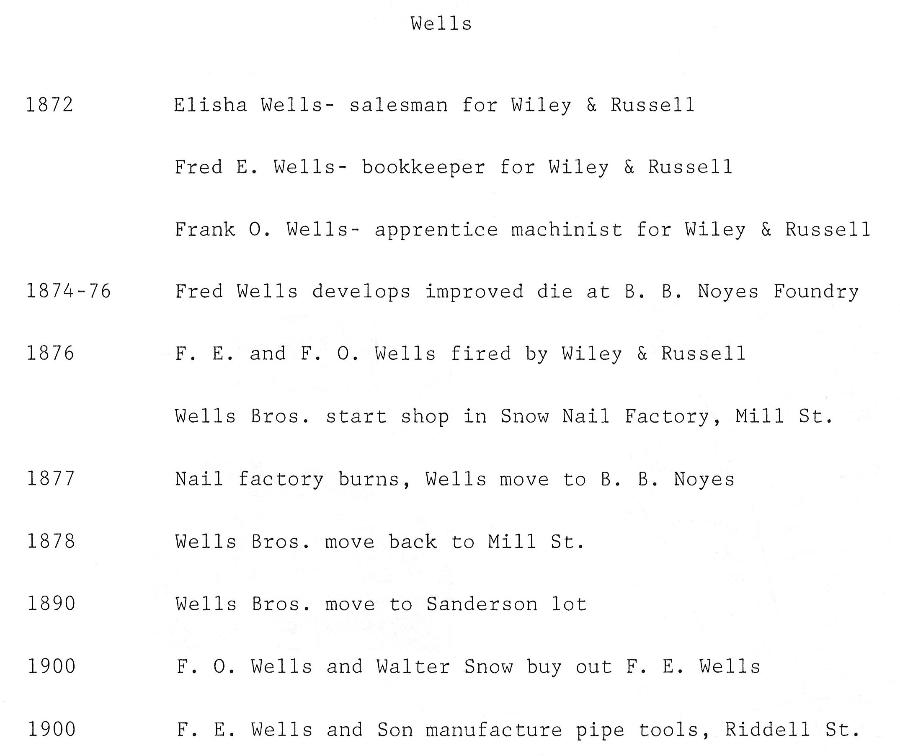 While their original core business was the manufacture of metal farming and blacksmith tools. We were just blessed with one such relic of this core business, The Samson Tire Upsetter (or Tire Shrinker).

This tool by Frederic E. and Frank O. Wells was granted patent number 269901 on January 2, 1883. It is capable of adjusting the circumference of metal wagon wheel hoops in a blacksmith shop. Wooden spoked wagon wheels “tread” consisted as a single iron hoop. This tool allowed the expansion or contraction of the metal hoop’s circumference in order to fit the wooden parts. Our new donation spent the 20th century in useful labor in an Amish community in upstate New York, and is probably why it still survives to come to us. 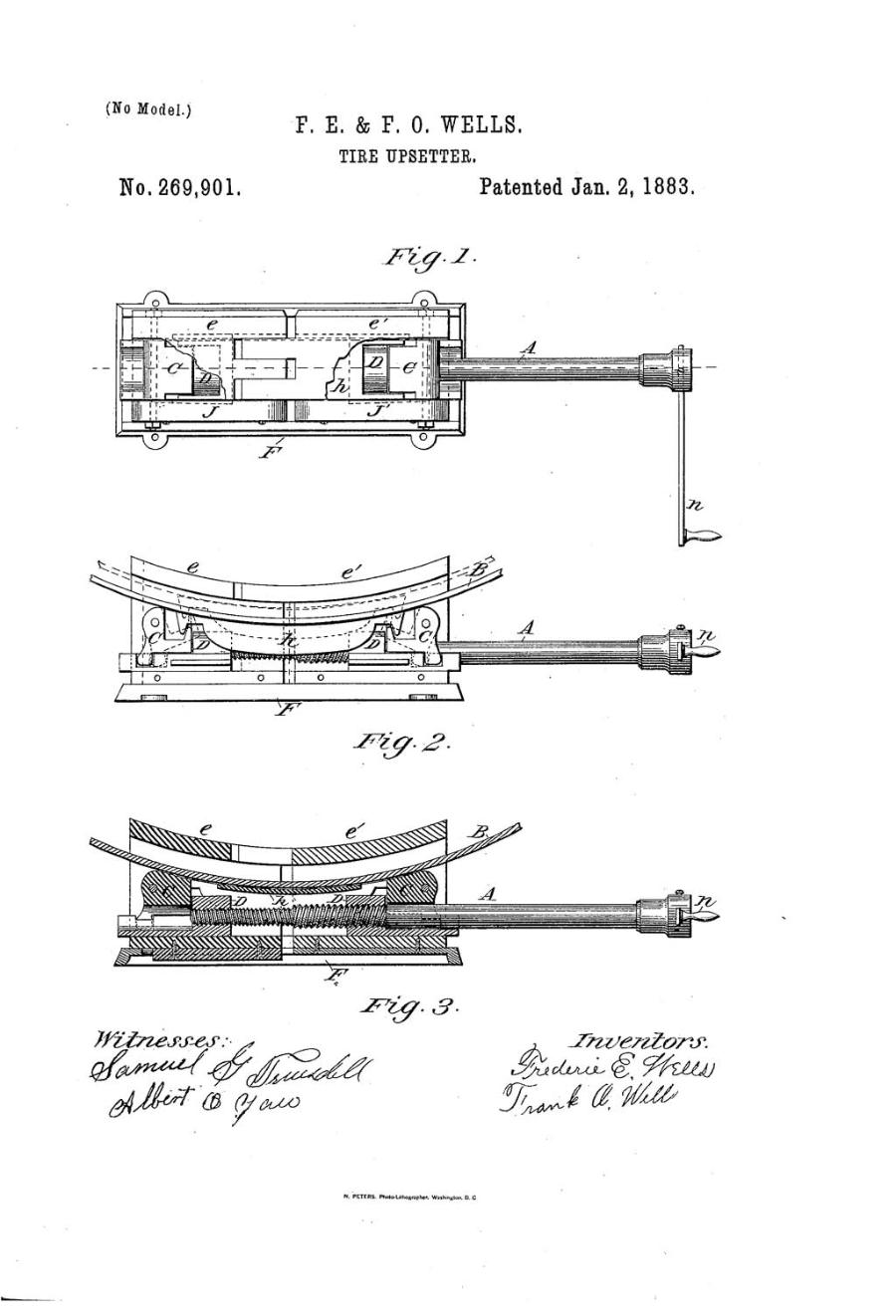