Toiletine is an alcohol-based, liniment-like remedy produced in this building from 1911 to 1971.

Toiletine Company started in 1885 when a "fast-talking medicine man" named Benjamin Franklin Miner set up shop in Hoosick Falls, New York, and moved it to Montague in 1900. Miner advertised his product as the "best type of all-round cure-all on the market." He marketed this and companion products (for example, shampoos, lotions, and flavor extracts) far and wide throughout New England in his horse and buggy. In 1910, William Ulrich bought the company and moved it to Greenfield, Massachusetts. The company disappeared in the early 1970's, probably due to the owner's failure to advertise in an attempt to keep the company small.

The Toiletine building is unique in Greenfield, built in the half-timbered Tudor Revival style with stucco exterior and is still standing. 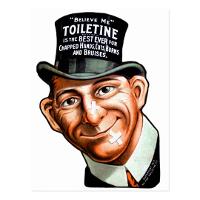