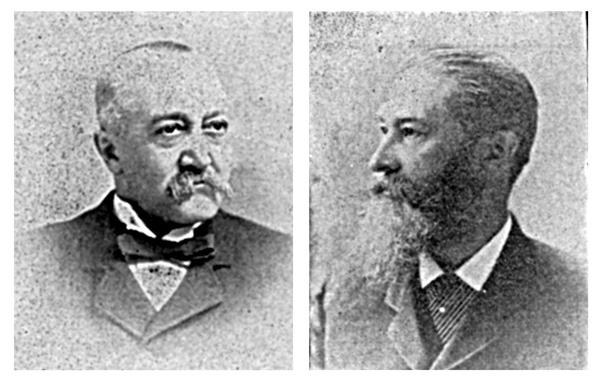 One of the most important manufacturing establishments in the county, and employing more men than any other in Franklin, is the New Home sewing machine company of Orange. With an invested capital of over $2,500,000 and an annual output of over 100,000 machines, it is not to be wondered at that the whole eastern part of the county feels the impetus of public spirit and enterprise which this corporation gives to the region about it. By pure merit, in simplicity of operation, durability of parts and economy of space, the New Home sewing machine has easily made itself the favorite, in hundreds of thousand households, aided, of course, by the general methods of business push and enterprise, and strict integrity. From a small beginning, the company has progressed to the second position in the sewing machine business of the world. Their machines are now used both for household and manufacturing purposes in Mexico, England, France, Germany, Italy, China, Siam, Central and South America, Australia, etc., and the indefatigable president of the company, Allen Schenck, devotes a large portion of his time to the extension of the export trade, now increasing to great proportions. It is needless to say that the “New Home” is true to its name, and the home trade shows it likely to be the first and favorite machine in America, at an early day.

For the benefit of those who do not know the advantages of the “New Home” machine we recapitulate a few of the points in its favor. First, the automatic inventions in use by the company, solely, give more accurate and easier running parts, which can easily be seen upon examination. Second, large space is afforded for working under the arm of the machine, which is so self-evident a valuable feature that we need not dwell upon it. Third, the spring tension shuttle on this machine is the easiest threaded in use and the tension may be changed without removing the shuttle. Fourth, the “New Home” has a self-setting needle and it is impossible to set it wrong. It never fails to perform its duty and will sew the lightest and heaviest goods with equal precision. Fifth, all the parts are made adjustable, so that lost motion from long usage can easily be taken up and the duplicating of parts avoided. Sixth, the parts are all case-hardened, of the best material, there are fewer working pieces than in any other machine and they cannot get out of order with proper usage, each part being adjusted to the thousandth part of an inch.

It is now easily seen that the “New Home “people were wise in expending liberal sums in experimental work, spending, indeed, what some over-cautious manufacturers might consider recklessly. Start­ing with the best and most expensive machinery and foundry, they are now reaping the reward of their sagacity, in the confessed dura­bility and nicety of adjustment in their machines, from the very first one put on the market to those of the present day. The voluntary testimony of the housewives of Franklin count}’ and America, for that matter, are the best advertisement the machine has today. Ask any housekeeper who has this machine in her home what the cost of repairs has been to her, and if she has used her machine carefully, it will be nothing or insignificant. This speaks volumes for “Little Franklin’s” sewing-machine. As we have already hinted, the machine is capable of a great variety and range of work, and the picture of “Pharaoh’s horses,” with the machine open and closed, shown in the engraving on the ninety-eighth page, intimates what can be accomplished in fancy stitching on this most versatile household treasure. 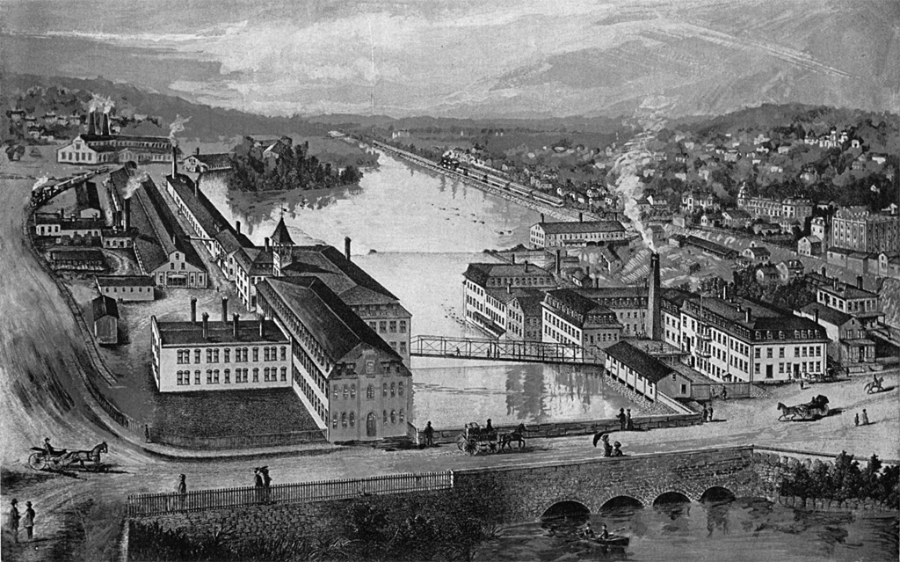 Briefly told, the history of sewing-machine manufacture in Orange began with the making of machines in the present location by Andrew J. Clark and Wm. P. Barker. But two men were employed and the first machine was known as the “New England single thread hand sewing machine.” In 1865 Mr. Clark bought out his partner, and in 1867 a new firm was organized with the name of A. F. Johnson & Co., the works were enlarged and the manufacture of the well-known “Gold Medal” machine was begun. In 1869 the firm was reorgan­ized as a corporation, taking the name of the machine, with Mr. Clark as president and J. W. Wheeler as secretary and treasurer. The sewing-machine combination was at this time at the height of its power and it was under a license that the “Gold Medal” was made and the “Home” first introduced in 1870. In 1877 the patents expired, the business was open to all and the “New Home” was then introduced; in 1882 that title was substituted entirely for the “Gold Medal,” the old company officers continuing, with Allen Schenck as vice-president and Wm. L. Grout as superintendent. From the small beginning already noted the area of buildings occupied by the company has increased gradually, until now its flooring com­prises an area of nearly 450,000 square feet. The en­graving on the preceding page gives a better idea of the great works than the most detailed description can do. The different departments are all of large space and altogether furnish employment for over 600 workmen. Two 100 h. p. boilers furnish steam heat and there are two 80 h. p. boilers and two engines kept in reserve in case of need. Water power from Millers river is generally used, and for this purpose there are seven turbine water wheels equal to 300 horse power, and this is supple­mented by power furnished from a Corliss engine of 250 h. p. with four boilers and another engine of 100 h. p. and two boilers. In the manufacture of the company’s sewing-machines over 500 different machines are in constant use costing from $100 to $4000, or nearly $1,500,000. Each separate piece of the “New Home” sewing-machine has several machines for its production and com­pletion.

The ” New Home ” has taken a large number of medals at fairs, including a gold medals at the Mechanics fair in Boston during the past few years and its exhibits on those occasions and also at its large agencies, have been some of the most elabo­rate and beautiful displays of sewing-machine work ever seen. Not long since ex-President Cleveland’s wife purchased a “New Home” machine without solicitation, by the recommendation of Mrs. Lamont, who had owned one for some time. 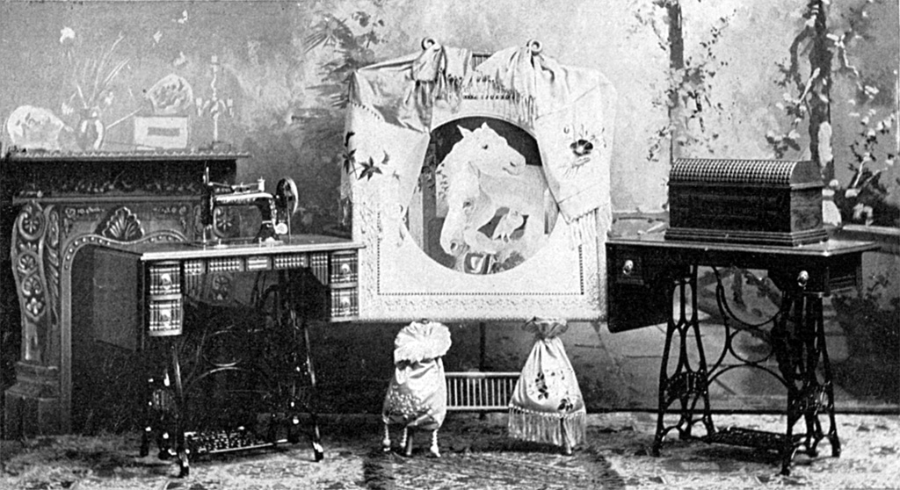 There are several expert operators in the regular employ of the company, producing various elegant and artistic samples for fairs and agencies, whose remarkable productions have elicited the most enthusiastic praise from the most critical observers wherever they have inspected these gems of sewing-machine art. At a certain residence in Orange were for a long time exhibited the most exquisite specimens in this line ever executed, including bed-spreads, shams, infants’ white mulle dresses, showing felling, hemming, sewing on lace, etc., — very difficult; portieres of white sateen, with figures in plush and tinsel applique, No. 2 arrasene, with a charming design of oak leaves, clover, wheat tops, begonias, tulips and pansies, all executed on the ” New Home ” without attachments, and as fine as the most delicate hand-work; also a charming afghan in quilting and arrasene, of wild rose design; etching of twigs and leaves on blue plush; sofa pillows, handkerchief cases, glove boxes, sachets of delightful patterns and execu­tion; a figured plush sachet edged with embroidery silk; tasty banners of rare design ; three yards of Lons-dale fine-tucked into one yard with an evenness and nicety truly wonderful — the tucks being one-eighth of an inch and as regular as if done automatically; off­hand silk etchings, without tracing, on duck, satin, plush, etc., including Rosa Bonheur’s grand head of an English harrier dog looking out of his kennel; “Babes in the Wood,” a group of puppies in a barrel, the little dogs, barrel, straw, collars, chain, bone, etc., being admirable; Rosa Bonheur’s majestic head of a lion, in stern but natural visage; other etchings of horses, cows and doves, fire-screens, vases and flowers, and other choice articles; imposing portieres of rare design and ornamentation in arrasenes, No. 2 chenille and Princess arrasene; also others in satteen applique on satteen, with silk veinings and edgings. Extensive and elegant displays of this nature can be seen at most of the agencies throughout the county, and any lady knows how to appreciate them. The people of Orange and Franklin county have indeed reason to be proud of the reputation of the “New Home” and its increasing popularity and success seems likely to make the county more than ever famous. We regret only that our limited space forbids more detailed description of the great works and their equipment, but these speak for themselves in their perfect product, and we thus dismiss an interesting subject, advising our readers, upon their first opportunity, to investigate for themselves.