This company was founded by Chauncey Wing who had a pattern making shop on the Green river in the 1870's. Born in Savoy MA. , in the 1860's he had worked as a stable boy for the steam engine company engaged in boring the Hoosac Tunnel. Interested in the machinery he saw there he went to the shipyards of Providence R.I. and learned pattern making. Over the years he would develop patents for a typewriter ,a paper plate making machine, a tool for shaping airplane propellors and a variety of automotive innovations. By the 1880's the shop had moved to Pierce St. where it still stands and is occupied by Pierce St. Ironworks. Producing the hand- held addressing machines since 1892 the company started experimenting with other products during the 1920's and was well prepared to diversify during the depression. Brothers Howard and Henry took over the company in 1918 and started tinkering with electronic equipment. That hobby developed in to the first non-stationary police cruiser radio system. In addition a Wing built radio was the first to establish overseas contact between U.S. missionary offices and foreign mission outposts in Africa. Also in the late 20's Henry began building roadsters of his own design but only 30 or so were produced. Wing Sport Special Roadster . Henry Junior and then Donald Wing continued the Addressing Machine business into the 21 century. 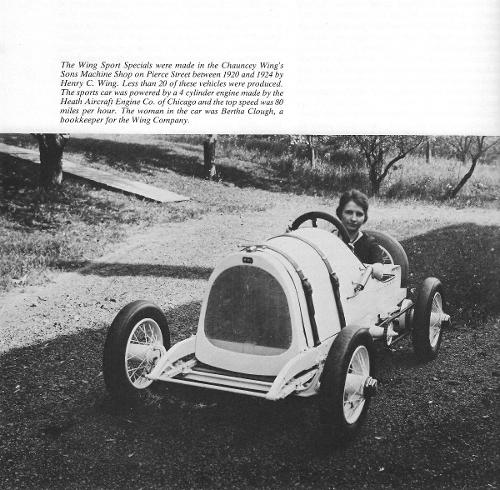