Around 1943 Ratheon Co. Electronics used part of the Lunt Silversmith's facility on Federal Street to build circuit boards and radio tubes to be used in the highly secret VT program. The Variable Timing Fuse also known as Proximity Fuse was to be used on Anti Aircraft, Ground Burst and Atomic bombs.

This program, second only in importance to the Atomic Bomb was declassified in the 1990's at which time the museum was able to acquire from John Hopkins University holder of the patents, documents, a copy of a film explaining the technology and actual samples of the device. Also as part of a video taped oral history project here in Greenfield ,Home Front Heroes, we have an interview with Bernice Weld who worked at the Ratheon operation and explains her role as a Greenfield resident on the home front. All three videos are worth watching but Bernice's is the second and Leon Weeks who founded our museum is the interviewer which makes the video extra spacial. Below are links to these two videos- 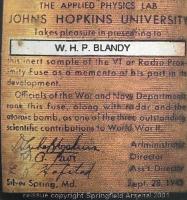